Home » Insights » Use the intranet for good

The “Making Smiles, Changing Lives” campaign was created to encourage employees to volunteer their time and raise funds for the “Operation Smile” charity, an organisation which helps raise awareness and perform life-changing operations for children with cleft palates. Johnson & Johnson has a long association with Operation Smile so it was a natural choice for the new campaign.

To help to encourage participation an intranet microsite was created to allow employees to share stories, photos and videos from their fundraising efforts and time spent volunteering. The site was optimised for mobile to make it easier for employees to send posts and images. Best of all, a counter on the homepage showed how many operations could now be carried out thanks to the effort of staff.

This intranet was not only genuinely engaging and inspiring, showcasing the great contributions of staff, but also raised a considerable amount of money for an excellent cause.

Intranets can be used for good

The Making Smiles, Changing Lives initiative is a great example of using the intranet for “good”.

Intranets have long been associated with communicating details of Corporate Social Responsibility programs which benefit charities and the local community. Increasingly companies are also launching HR initiatives which focus on the health and well-being of employees too and creating dedicated areas of the intranet.

The advantages of CSR and well-being programs are numerous and include:

The increasingly social and participative nature of intranets can also energise and extend the power of CSR efforts just beyond disseminating relevant information or news stories. Typical ways intranets are used to support CSR efforts include:

In fact there are many ways in which intranets can be used for good. Here are just a few examples from the most recent Intranet Innovation Awards. 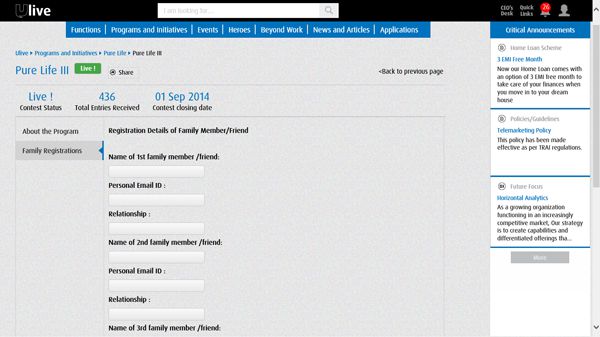 A page from the “Pure Life” health and well-being program where family members can be signed up for health tips. Screenshot appears courtesy of Bajaj Finance.

Bajaj Finance is a financial services company with nearly 150 locations across India. On the company’s new intranet the firm has introduced various features which have helped to promote different HR and communication initiatives. These include a place on the intranet for CEO communications, allowing female employees to book taxis from the office via the intranet and a forum for HR-related questions.

Another initiative was the “Pure Life” program, an initiative focused on increasing employee health and well-being. Previously this had been an off-line initiative which had one activity per year, but making it “virtual” on the intranet meant the program could be extended and also involve employees more directly.

The number of activities per year was extended to seven, employees could now make pledges and share “Pure Life” stories with others and they could even now register family and friends for health tips. It is felt that the new extended program and emphasis on contributions has helped to drive employee engagement.

Plan International is one of the oldest and largest children’s development organisations in the world. It works in 50 developing countries across Africa, Asia and the Americas to promote child rights and lift millions of children out of poverty.

In some respects because the intranet supports the daily activities of the charity, the intranet is always being used for “good”.

One particular feature is the use of employee blogs which showcases the positive work that is being carried out across the world by Plan International. A roll-up page of posts means these stories can be accessed from one place, with the ability to like and comment on stories making them more engaging.

The blogs help to drive the sense of purpose which is fundamental to the success of the charity.

Australian legal firm Minter Ellison runs a Community Investment program which allows allows employees to contribute to the firm’s chosen charities and also carry out pro bono work in areas such as helping support the homeless.

If you’re using your intranet for a great cause in an inspiring way then make sure you enter the 2015 Intranet Innovation Awards! We’re accepting entries right through to June 5th.

For more insights, you can also see the Intranet Innovations report, which represents incredible value, featuring 17 in-depth case studies and over 200 screenshots. This is the must-have report for intranet teams to guide their planning!