Trying to understand and evaluate even simple collaborative activities, such as document creation, can be time consuming and difficult using traditional one-on-one research techniques. Does it really need to be so difficult?

Collecting too much data

Conducting individual interviews with everyone involved in a process can generate vast amounts of data. The problem is that it is impossible for the interviewer to destinguish the important information from the insignificant until they evaluate their findings. So the interviewer has to record everything that occurs during each session.

Identifying trends and issues from large amounts of data is difficult, time-consuming and a specialist task. Many research teams fail because they simply have more information than they are able to evaluate.

When to conduct a paired interview

Paired interviews should be considered in the following situations:

Unless the participants share a working space, it is best to conduct the paired interview in a neutral environment such as a meeting room.

With the creation of each note, the interviewer should encourage the second participant to compare whether or not they use the same workflow and terminology.

Although this process may initially be slightly stilted, after a couple of activities the participants should be interacting without much encouragement from the interviewer.

As the two participants detail and discuss their workflows, the interviewer is free to observe, take notes and seek clarification where necessary.

Getting the most out of a paired interview

To get the most benefit from a paired interview the interviewer must ensure that both participants contribute to the session.

Consider the following guidelines for the interviews:

Watch out for dominant participants

All forms of multi-person research run the risk of being dominated by one of the participants. This is especially likely if the participants have a dominant-subservient working relationship.

If one of participants starts to dominate, the interviewer should direct questions specifically to the quieter participant.

Iain Barker is an alumni of Step Two Designs, and a specialist in usability and information architecture techniques with over ten years experience in the industry. He has worked in Australia, the UK and Europe. 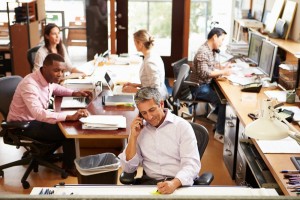