I’ve just spent the last two days helping an Australian government agency develop their web CMS requirements. As one might expect, the topic of recordkeeping came up, and how it should relate the CMS and intranet. I also had a long conversation at the end of the first day with the records manager, who is in the early stage of purchasing the agency’s first recordkeeping system.

It struck me again how big a challenge recordkeepers have within organisations. To be successful and useful, staff must save all the relevant documents into the system.

This makes adoption imperative, and highlights how hard it is to demonstrate success in the early (and later!) stages of rolling out the recordkeeping system.

For me, this means I’d prefer to have 100% of just five types of documents, rather than 20% of everything. At least then I could say to staff “For these five things, look in the recordkeeping system because they’re all there. For everything else, we’re getting to that.” This is a very different approach to training every staff member, hoping for the best, and only getting 20% of what’s needed.

What do you think? Worth trying? 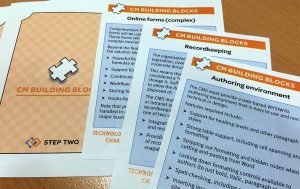